To get started, a user creates whats known in iWay 8.0 as an Application Project.

Within the Application Explorer view, right mouse click and select "Application Project" as shown below.

A wizard will appear which prompts for a project name. Enter "myproject" as shown below. Projects to be built and managed using Maven should select the radio box below. For now.. just leave it unchecked. 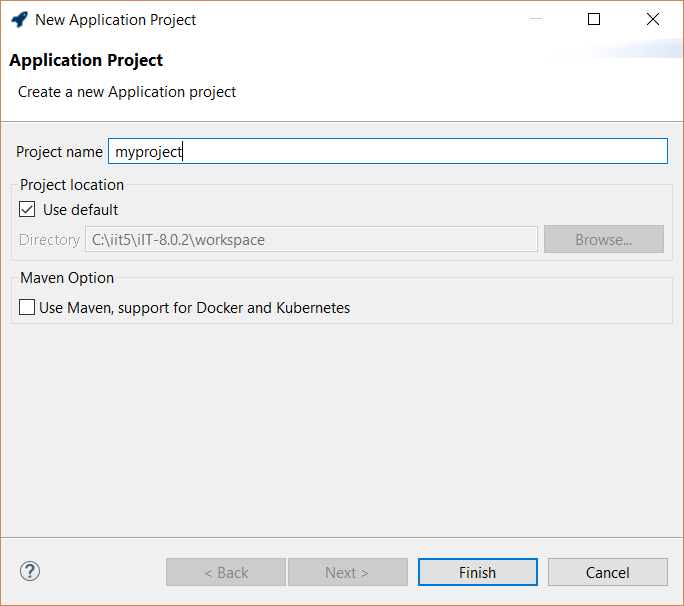 Once completed, click "Finish".  Congratulations !!  you now have created your first application project.

As you work with the application project... the contents of the bundle change accordingly. Most likely, items listed in the "Components" section will change when project artifacts, such as api's, flows and channels are either added or removed from the project. By default any artifact added to the project is added to the bundle. Thus the bundle represents all artifacts making up an application. The application editor is organized as follows:

When creating XML based SOAP RESTful services using the iWay Explorer (Adapters) those services need to be injected into the runtime. This tab manages which SOAP based REST services will be available to call in the run-time.

Application Bindings allow developers the ability to inject variables into the run-time. It is assumed those variables will be used either by a flow or channel in a run-time.

The Application project is organized into several folders. A description of each folders use can be found below.

The API folder is the default folder for storing REST based API's. These API's are created using the iWay API builder.

The Channels folder is the default folder for storing event based channels. Channels are created using the iWay Channel Editor.

The Flows folder is the default folder for storing Flows. Flows are orchestrated using  the iWay Flow Editor, a drag drop interface for creating simple to complex point to point integrating solutions.

The Resource folder is the default folder for storing integration dependent artifacts. By default any file based artifact will be included within the application bundle. These artifacts will be found within the resources directory of the deployed run-time.

The Templates folder is the default folder for storing iWay deployment templates. Deployment templates allow users to create a component which inject configuration into runtime creation. Often these templates contain variables whose values are specific for either development, test and or production environments. Templates can be created using the iWay Template Builder.

The Transform folder is the default folder for storing iWay Transforms. Transformation is one of the most important foundations of an integration platform. The iWay Transformation Builder allows users to create simple to complex transformations using a graphical drag-drop interface. A wide variety of formats are supported such as JSON, XML, CSV and many more.